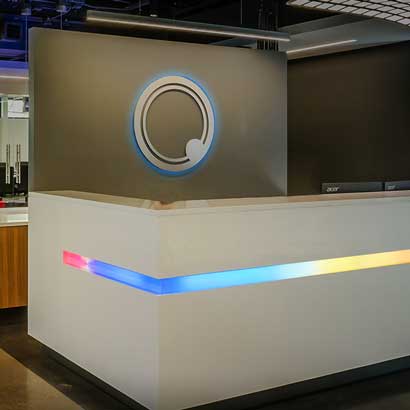 The Lighting Agency has been an industry leader for over forty years for one reason: Our people.

Whether you’re a company friend, a valued client, or just learning about who we are and what we do, you’re invited to follow along for a three-part series spotlighting Team TLA’s incredible managers.

Keep reading as four members of our Lighting Managers Team introduce themselves and reveal the passion, expertise, commitment (and fun!) they bring to their roles as leaders and the continued success of our company. 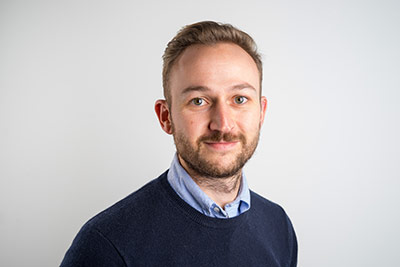 “Evan is the brains behind the operation here at TLA.  He is extremely knowledgeable about all things pertaining to finances, human resources, benefits, etc.  He is always dependable and willing to go the extra mile when not asked. He’s been a crucial piece of TLA since Korinn retired in 2019.”

Hi there!  My name is Evan Malkin, and I’m the Operations Manager at TLA.  While my role encompasses a few different departments and many hats, most of my work revolves around overseeing the company’s financial health and being the company resource for our employees daily.  I’m a native of Colorado, having spent my entire youth, college, and now a career in the state.  I joined TLA back in 2008 when jobs were scarce, and I was willing to try just about anything.

Art Fisher, a long-time family friend of ours, gave me a shot at working as an accounting assistant although I had just about zero experience in that field. Over the next decade-plus, I’ve been given opportunities to grow and expand my duties at TLA. After completing my MBA in 2014 while continuing to work at TLA, I’ve settled into my current position these past few years.

The best part of my job is that every day is different. Whether planning various initiatives with the company Principals, rolling out new benefits to the employees, recruiting and onboarding future TLA’ers, or just digging into endless numbers and spreadsheets, every day at TLA is a challenge I enjoy. Another amazing part of working at TLA is the familial culture that has evolved over its 40 years in business. Due to our extremely low employee turnover, I’ve been able to spend my 13+ years with many of the same people. Except for about 18 months of working from home, I enjoy coming to the office to work with people who have a similar drive for personal and company success.

My approach to management is two pillars, being approachable and empowering my team. I’ve worked for managers in the past where asking a question came with sweaty palms and dread. I operate with an open door and invite those that I work with directly and indirectly to stop in to discuss whatever may be challenging them that day. Also, I prefer to let my team make decisions for themselves and will only offer my advice if asked or when necessary. This empowerment opens communication and creates a more frictionless work environment. 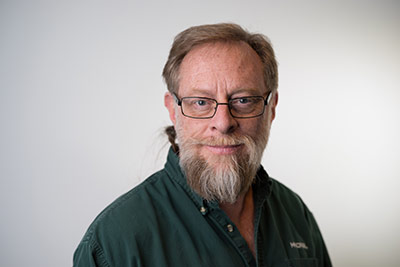 Bob is an industry stalwart here at TLA and is known to be a top lighting resource for many of the top designers/engineers in Colorado. It’s always nice to have his knowledge base here at TLA to rely on when technical questions come up.


Hi, I’m Bob. Born and raised in Colorado, my family goes back many generations. I have Pioneer Plates on my truck from back when you had to prove ancestry. Very Colorado. I enjoy skiing in the winter, dirt biking in the mountains, and camping in the summer. That, along with being the Captain of TLA’s volleyball team – Lit Up – for 20+ years, are what interests me outside of the work I do here.

I attended the University of Colorado – Boulder and received my bachelor’s degree in Architectural Engineering, a subset of Civil, with a specialty in Lighting. A narrow field, but one I fell in love with after leaving the Aerospace Engineering program in which I spent 5 semesters before coming to the full realization that I did not at all care for a lifelong dream.

I met Art Fisher, the founder of TLA, when I was working for Peerless Lighting out in Berkeley, CA.  It was my second job out of school, and I was impressed by how he had very recently lost his eyesight but had retained a personal assistant to be his “eyes” and did not let his new situation slow him down at all.

Shortly after that encounter, I returned to my original employer in a new position for me involving photometric testing and optical design. About a year and a half later, Art contacted my former boss at Peerless and asked if she would be interested in moving back to Colorado (she was also a CU grad and from Colorado) to take a position Art had created at TLA. She’d be the second person to have the job, one of the very first positions at a Lighting Agency for an on-site applications person to assist in pulling together calculations for spaces with several lines of fixtures utilized at once. Some engineers could do this, but a lot of analysis at the time was done by individual factories (like the ones I worked for) who would not combine with others.

She was well established in the Bay area and turned Art down but was kind enough to say she might know of someone interested in moving back home for the right opportunity.

That was January of 1996; I had just been home for Christmas without any idea of what might be in store for me. I flew out to interview with Art shortly thereafter and accepted the position. I started at TLA in March of 1996.

I really enjoy helping folks figure out if their ideas on lighting are going to work for their situation. I call myself a lumen counter and have counted many over the years. My twice employer was an outdoor lighting company, and I still love doing site lighting above the rest. That comes with its own set of challenges, mostly coming from Municipalities who write things into Human Law that violate the Laws of Physics. I wish they’d hire lighting professionals to review when writing their codes, but then again, they do give me a great challenge from time to time.

We have folks of all levels of experience at TLA, and I like to share what I’ve learned over the years with all of them, sometimes to their chagrin, but that is what experience can sometimes bring.

Have a great, Bob-filled, reading experience. 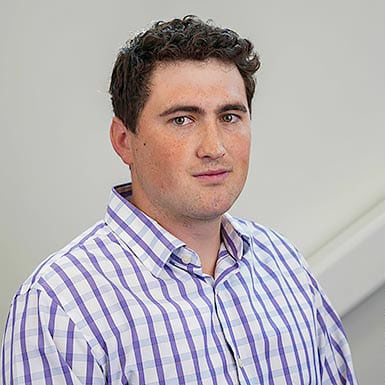 One of TLA’s youngest managers ever. He stepped into the roll at critical time when the agency needed a top Quotes Manager. His lighting knowledge and dedication to the trade and lighting industry was quickly recognized by the community.  We’re lucky to have William as Quotes Manager.

Introducing William Cobb: Team TLA’s millennial mastermind who gets all the numbers to line up!


I was born and raised in Centennial, Colorado. Being a Colorado Kid, I naturally ended up at the University of Colorado, where I studied Architectural Engineering.

In 2013, I was connected to TLA Principal Ryan Stewart through the CU I.E.S chapter. When I joined The Lighting Agency, I began working as an application engineer in the Inside Sales department. After a year of Inside Sales, I moved into the Quotations Department.

I was immediately humbled by the complexity of the lighting procurement world, but I was fortunate to be surrounded by great mentors that had incredible experience in the industry.

As the Quotes Manager, I am grateful for the chance to pass on my expertise to my team. Every day at the Lighting Agency brings a new challenge along with a new opportunity for growth. 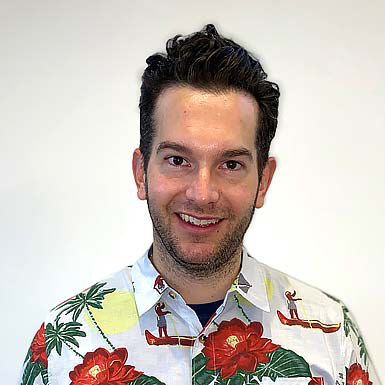 Joey has been the driving force behind developing the Project Management department here at TLA. His past quoting role here at TLA has enabled him to develop the PM department in the state and possibly the country. His passion for this roll unparalleled and we’re looking forward to seeing it grow over the coming years.

Introducing Joey Bullock: The kid who grew up watching wrestling at TLA on Sundays while his dad worked, Lighting PM Manager!

My name is Joey Bullock, I am from Littleton, CO, and I graduated with a bachelor’s degree from the Leeds School of Business at the University of Colorado in 2004. My dad worked at TLA for 34 years, so I grew up coming into the office with him. He worked almost every Sunday to get a start to the ensuing week and would lure me to work with him by letting me watch wrestling on the TV in the conference room. I’d always get roped into helping him compare fixture counts or reading part numbers off a fixture schedule for him.

I’ve had two rounds with TLA: originally from September 2005 – May 2008, and then rejoining the company in July 2019. Since I’ve been back, TLA created a new project management department and asked me to help spearhead processes and protocols. The goal of the new department is to absorb many of the tasks that have been historically completed by the quotes team to allow them more time to do what they do best: quote!

As project managers, we are responsible for reviewing product submittals with the sales team, reviewing take-offs with electrical contractors, finalizing the bill of material with the quotes team, and prepping a project in a concise document package for the customer service team to order.

The best part of my new role at TLA is the volume of interaction I have with the different departments within the agency. Projects we work on can have complicated, detailed requirements, and we must collaborate to achieve a common goal. I am amazed by the level of knowledge my co-workers have, and it is a privilege to get to interact with so many of them daily.

Look out for Part Two

Thank you for joining us for Part I of the Team TLA Managers Spotlight. Be sure to follow us on LinkedIn, Facebook, Instagram, and Pinterest, and subscribe to the TLA Newsletter for more to come from our dynamic team of industry-leading managers.

See you next time!
—Team TLA

We want to hear from you! Do you have questions about upcoming events, or have an event that you’re hosting that we should know about? Email Dawn Webber.

Be sure to bookmark our Events page. Sign up for scheduled and ongoing virtual presentations, seminars, and trainings for a full spectrum of lighting topics including controls, design, and products.

Stay current on all things lighting by subscribing to the TLA monthly newsletter.

LEARN ABOUT EVENTS, NEW PRODUCTS AND WHAT'S NEW AT TLA.

By submitting this form, you are consenting to receive marketing emails from The Lighting Agency.